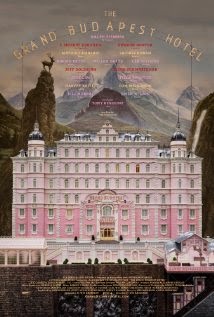 I usually approach a Wes Anderson film with caution. The trailers for his films invariably make them appear interesting and hilarious but too often I have found the trailers contained all the best bits and the films themselves to be less interesting than I had expected.

The trailers for 'The Grand Budapest Hotel' have been as tempting as any for his earlier films so my expectations were high. The film centres on M Gustave H (Ralph Fiennes) the super efficient bisexual concierge of a grand pre-war European hotel who beds his wealthy elderly female guests and enjoys the fruits of their gratitude thereafter.

The film is lush, colourful and stylish and shamelessly indulges in cheesy effects. It is also, in Anderson's usual style, quite quirky.

Once again, many of the best moments are revealed in the trailer but this time there is still sufficient left over for the film to maintain interest.
★★★★
Posted by Victor at 08:40