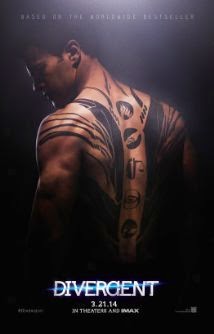 'Divergent' is set in a war ravaged Chicago of the future where the entire population is broken into five groupings which determine their behaviour and character. Children are born into the grouping of their parents and on their eighteenth birthday they get a once only, non revocable, choice to remain or change to another group.

The film opens with the heroine having to make her choice and then spends most of its duration depicting the training she receives to remain in the group she chooses. There are some interesting issues here relating to people's desire to belong and fit in but the film focusses on the wham bam action of the situation rather than any moral issues.

The film is derived from books which I understand are very popular amongst young women in particular and it is worthy that the story is built around a heroine rather than yet another beefy, boofy bloke. At the session I attended the audience was about 95% mid-teenage yet it is an "M" rated movie and most of the action revolves around murder, mayhem and violence.

Technically well done but this won't appeal to a broad audience and it is best viewed with your sense of logic suspended.
★★★
Posted by Victor at 09:00