An update from six hours ago.

The rain seems to have cleared and whilst it is still cloudy the sun is shining and the temperature is 25°c.

Bradleys Head can be seen more clearly than before but to my surprise there appear to be no people camped there waiting for the fireworks as in previous years. I wonder whether the Police have blocked off the area for local residents only as they have done in other parts of harbour frontage areas. 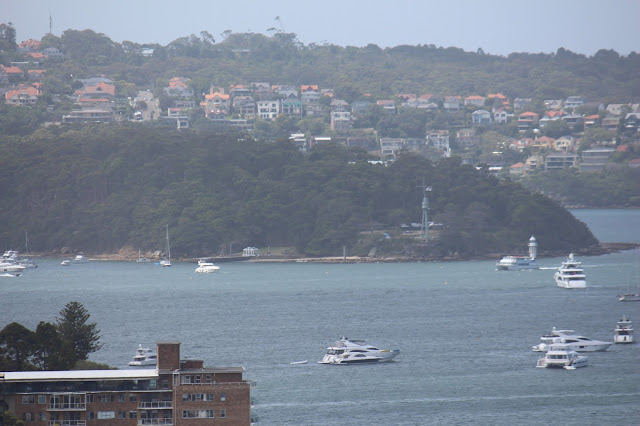 Off Double Bay there are a few more cruisers anchored ahead of the fireworks. 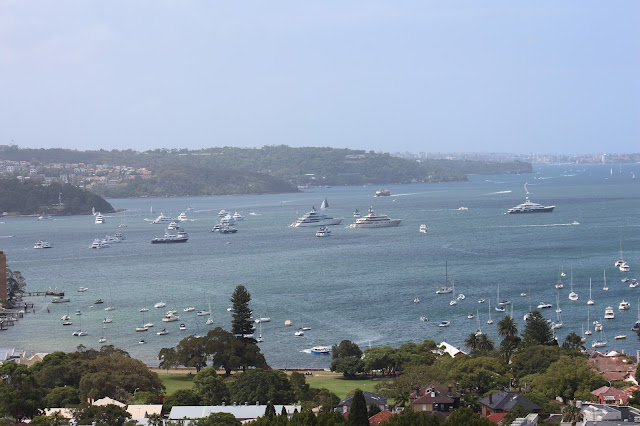 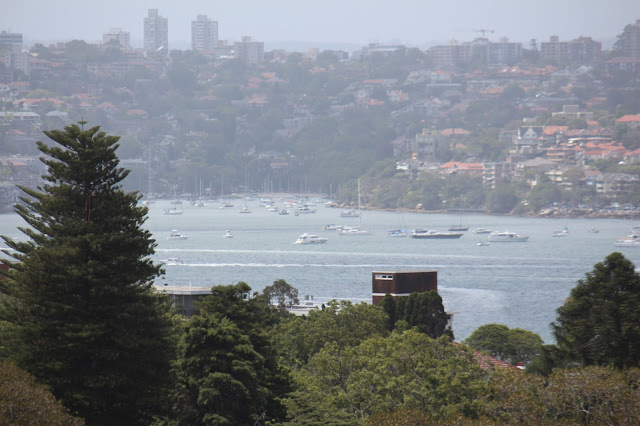 The easterly breezes continue leaving all craft facing away from the main fire works sites.
Posted by Victor at 15:00 2 comments:

Fifteen hours until the New Year and as forecast it is raining in Sydney. This bodes badly for the city's famous new year fireworks but the rain forecast is for morning and early afternoon so hundreds of thousands spectators will hope that the forecast is accurate and that the sky clears by tonight.

In the murk of my zoomed in iPhone camera here is Bradleys Head, visited earlier this year by  Andrew & R, barely visible through the rain. I guess that as usual the location is already packed with people facing the long wait for the fireworks. 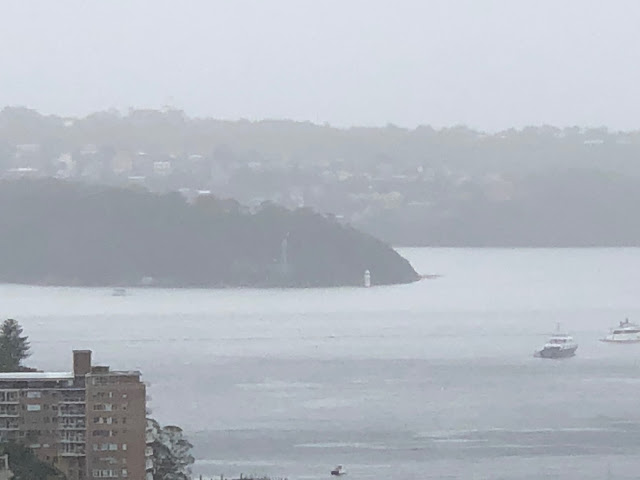 Meanwhile on the harbour, off Double Bay, several luxury cruisers are early arrivals for the armada of watercraft that annually packs the waterway for their very special view of the celebrations. 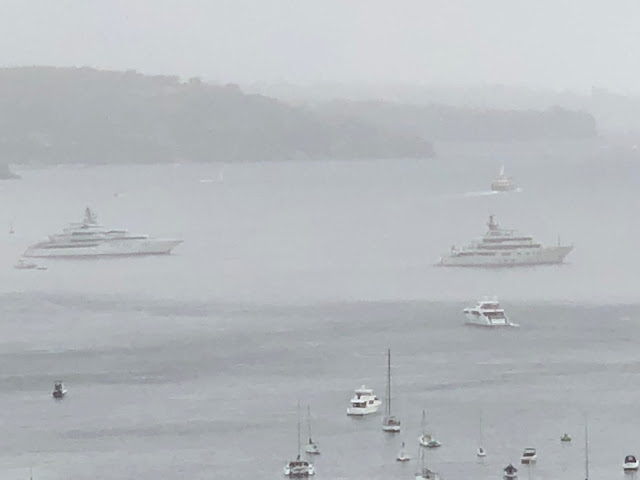 The wash from a Manly Ferry headed for that seaside suburb can just be made out. An easterly breeze at the moment has the two cruisers facing the opposite way from the main fireworks location.
Posted by Victor at 09:00 2 comments: 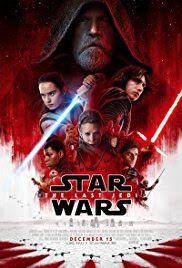 The eighth film in the Star Wars series, 'Star Wars: The Last Jedi' tells effectively the same story as each of its predecessors. A motley group of rebels, grossly outnumbered, band together to fight the evil leadership of the Galaxy. This latest edition also focusses on the future of the line of Jedis.

Recent episodes have become stale in my opinion but this film is an improvement. It makes good use of humour, has some magnificent images and, as to be expected, is filled with excellent special effects.

At least thirty minutes too long but better than its recent predecessors. 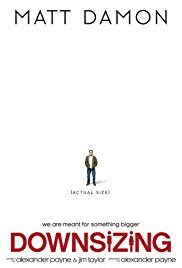 Norwegian scientists, concerned for the effects of over population on the planet, discover the means to miniaturise almost any organism. The discovery leads to voluntary but irreversible 'Downsizing' transition programs for individuals who wish to enjoy an improved lifestyle whilst reducing their impact on the environment.

Paul (Matt Damon) is a disillusioned underachiever struggling financially to get ahead who is persuaded to join the transition program with his hesitant wife.

This allegory about humankind and the environment has its entertaining moments but is also a frustration riddled with implausibility and illogical concepts.

A curiosity with, I imagine, limited appeal. 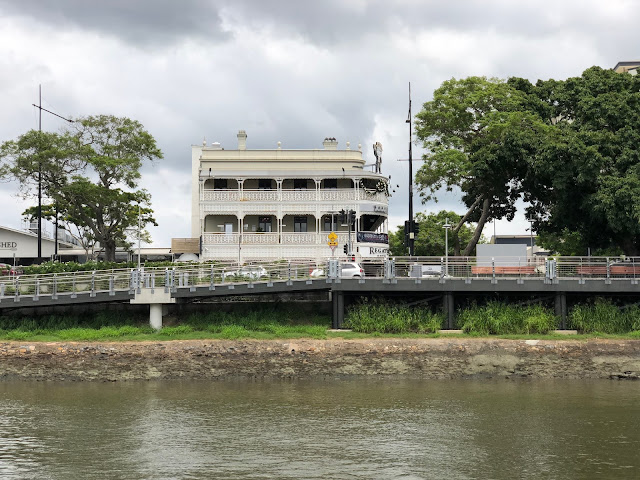 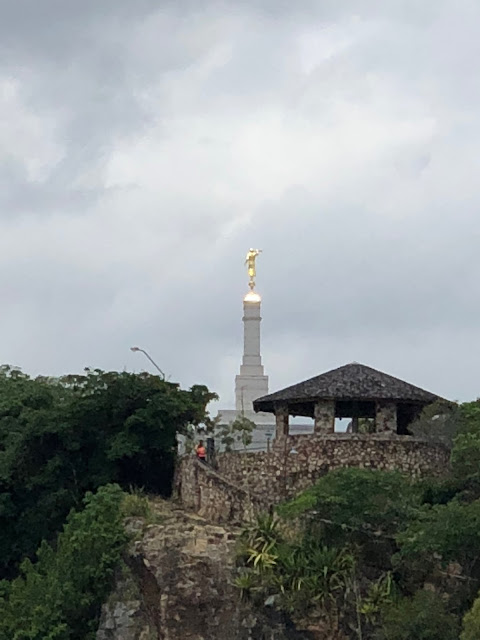 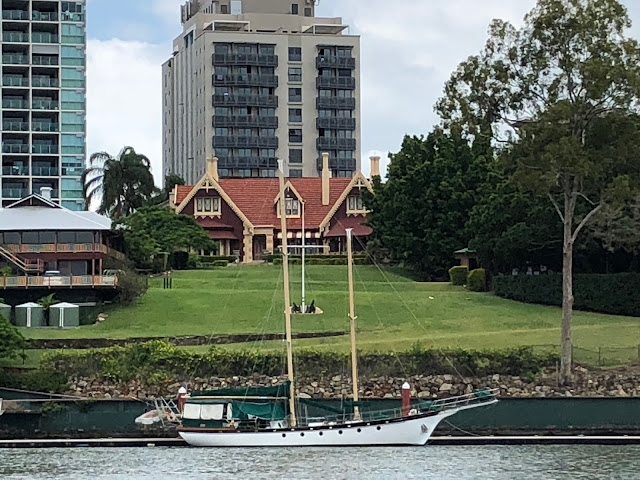 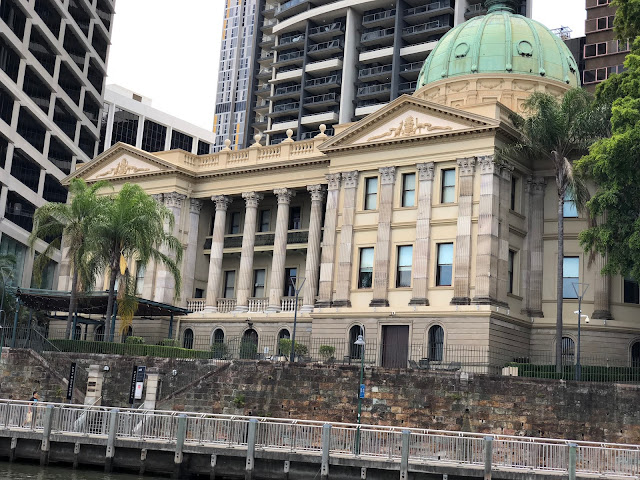 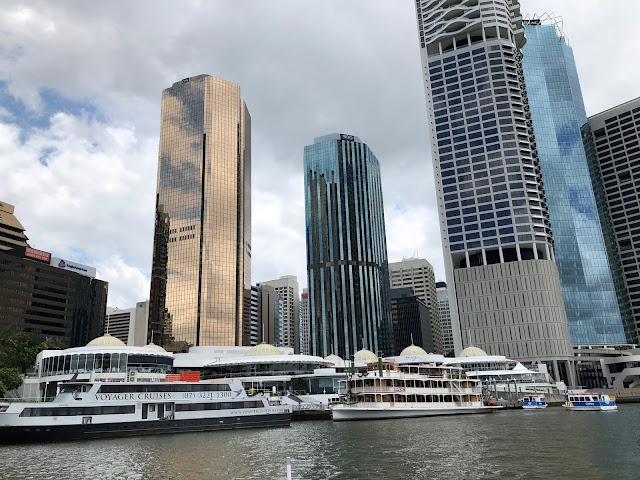 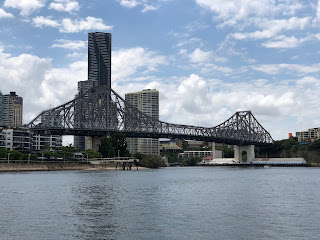 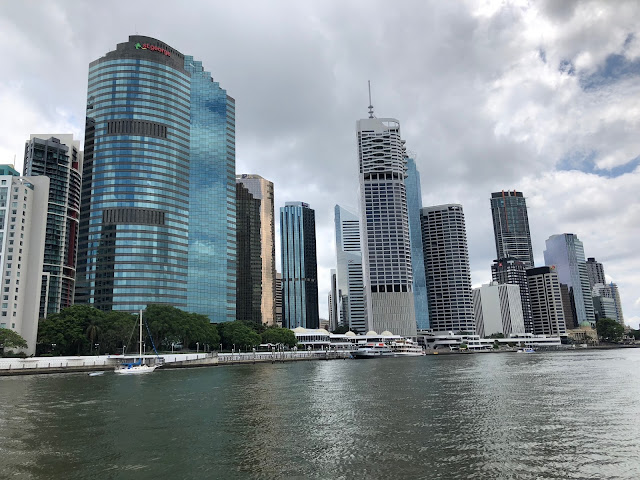 Email ThisBlogThis!Share to TwitterShare to FacebookShare to Pinterest
Labels: australia

Email ThisBlogThis!Share to TwitterShare to FacebookShare to Pinterest
Labels: celebrations

On top of the world 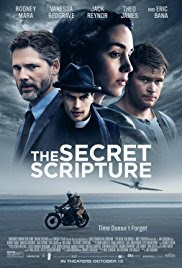 The setting is a mental asylum in Ireland that is shortly to be converted into a luxury hotel resort. One long standing patient (Vanessa Redgrave) is resisting a forced move away from that home and is clearly tormented by her past. A doctor is brought in to encourage her co-operation and in doing so is drawn into the patient's past shown in flashback.

'The Secret Scripture' is based on a novel. I don't know whether the plot is based on a specific individual but the circumstances portrayed have a strong ring of truth.

A devastating tale of prejudice and injustice. 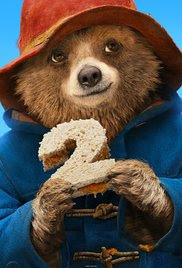 That cute little bear is back. Now an accepted and loved member of the community Paddington 2 gets into strife over a present he has in mind for his aunt.

This is such a clever achievement; the lifelike creature with human like emotions and body language. Obviously aimed for threat free family viewing the film manages some wink at the audience moments for adults whilst retaining all its attractiveness and attention for children.

The Hugh Grant encore in the end credits is a bonus for lovers of cheesy musicals. 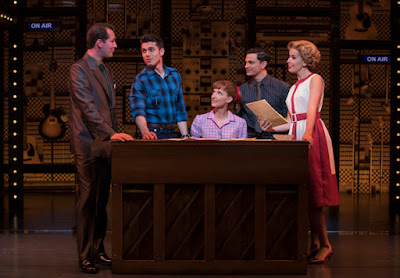 'Beautiful: The Carole King Story' is a stage musical that tells the story of the famous songwriter and singer between the ages of sixteen and twenty-nine. In reality the show is mostly a concert of her songs (many co-written with her husband, Gerry Goffin) and other songs of the era linked with occasional dialogue and some key moments of her life during those years.

An enjoyable couple of hours and an interesting recreation of the musical entertainment of that era.

The ladies who lunch?

L and W decided we should have meet for lunch ahead of Christmas. 'We' being a group of six former co-workers plus two hangers on (read one husband and one gay friend) who periodically socialise over lunch. L and W would be described by some as 'fag hags' but that is a term I have never liked; it sounds tacky and pejorative to me. They chose the location, a Pizza restaurant in the CBD which the others didn't fancy from the experience of previous visits but, hey, I eat occasionally at the Golden Arches so what do I care.

The day before the lunch both L and W dropped out for personal reasons leaving the rest of us to lunch at a venue most didn't want to attend. The socialising was enjoyable but the others criticised the food (predictable) and (rightly) challenged being charged for a non appearing salad. The bill was adjusted.

I didn't notice the apparently slack service the others commented on and was content with my Pepperoni Pizza minus Olives. No doubt I reeked of garlic afterwards. 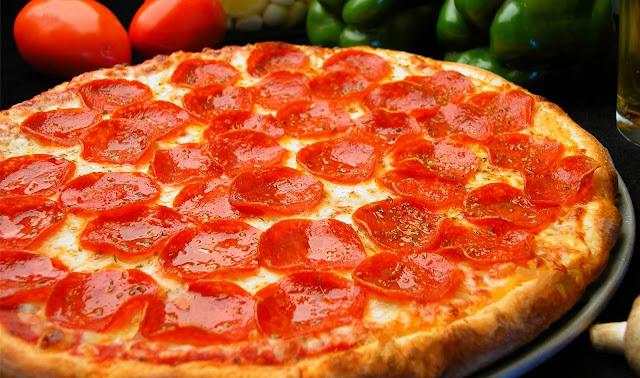 Lunch at a venue no-one wanted to attend organised by two ladies who failed to attend.
Posted by Victor at 17:00 4 comments:

Sydney's Wynyard Railway Station is undergoing a major refurbishment even as a new skyscraper is being constructed above it. The station has long been noted amongst locals for its long, slow moving wooden escalators initially installed in 1932.

You can read about them here.

The wooden escalators have been replaced with modern metal versions. For once, though, Government hasn't simply obliterated past glories. Sections of the now replaced wooden steps have been retained as an art installation hanging above their replacements. A nice job, I think.

Two blocks of tracks for Sydney's new CBD and South-Eastern line under construction have been revealed on George Street between Park and King Streets.


Meanwhile this photograph on a construction site at the nearby suburb of Paddington from another time when trams ran along King Street in the CBD.

Postscript: I've just noticed the FREE WIFI sign which appears neatly to be on the window of the Surrey Hotel. I suspect someone has stuck that on the hoarding photo as a joke.
Posted by Victor at 17:00 5 comments: 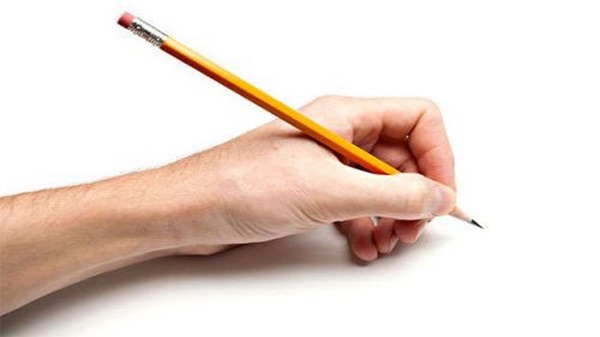 Nowadays, even though we 'cacky-handed' ones still represent little more than about 10% of the world's population, it is very rare for anyone to make that observation to me.

I am aged 68 and life for me as a gay man is very different now from when I was teenager and my orientation was not only shameful but criminal and needed to be kept secret. Indeed as a teenager I was referred by authorities to a Psychiatrist who, I guess, investigated my 'deviance'.

It would be nice if Marriage Equality was the final step to complete equality for gays, lesbians etc. But still we are exhorted or encouraged to 'come out'; and having 'come out' we continue to 'come out' again and again. Yes, life for us is much better today but there is still a way to go.
Posted by Victor at 12:00 6 comments:

Some snaps from the Art Gallery of New South Wales where the current main exhibition is Rembrandt and the Dutch Golden Age. 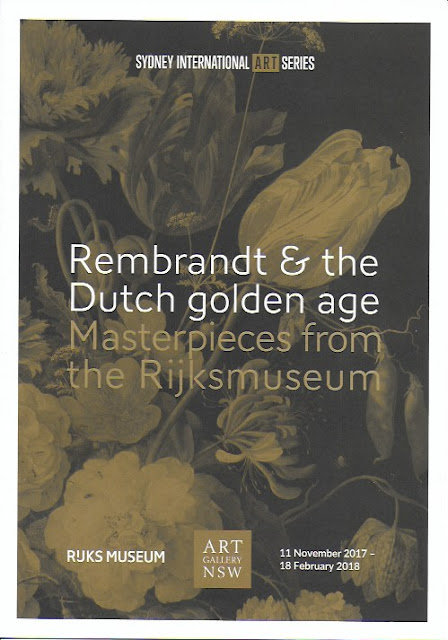 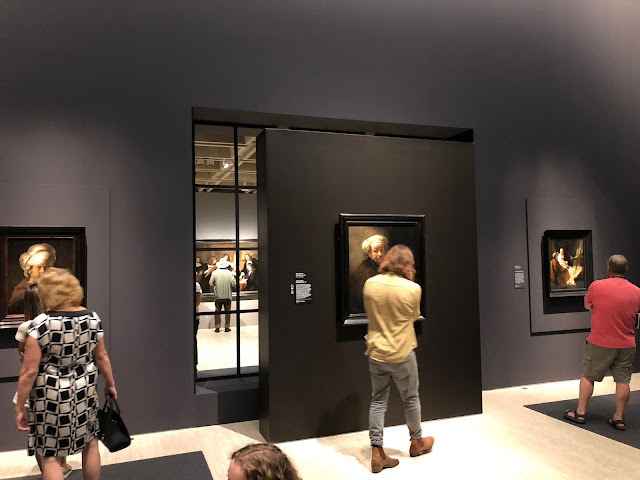 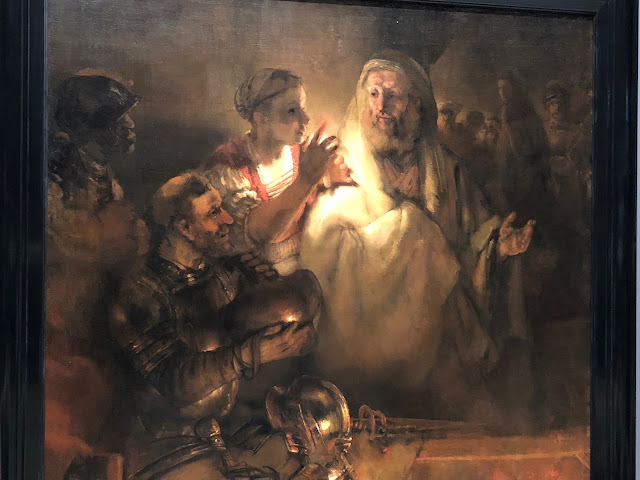 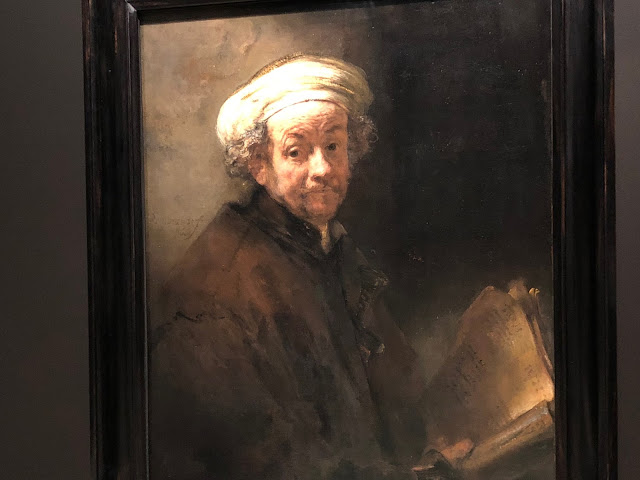 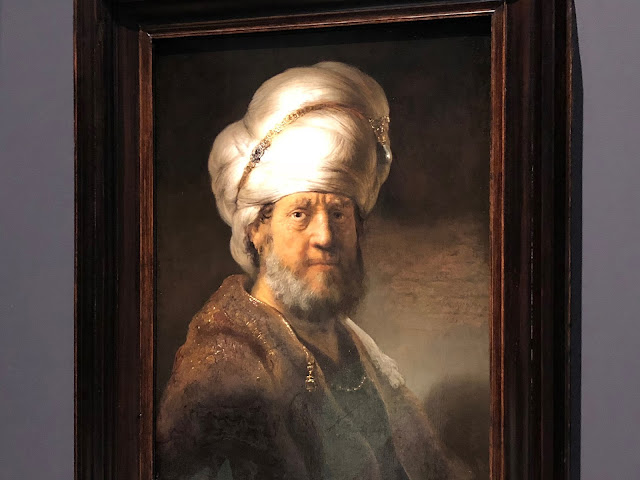 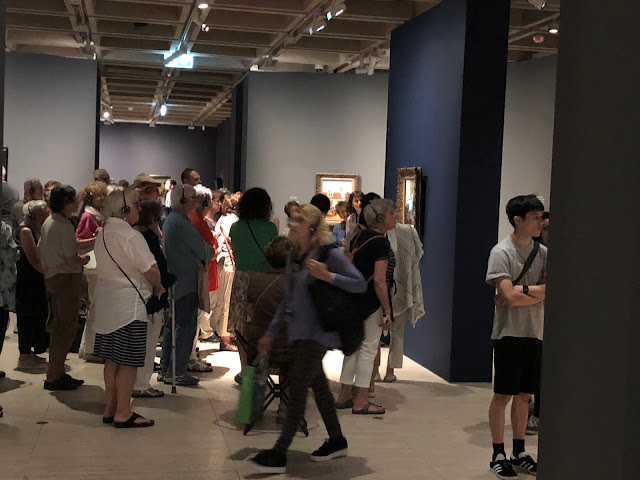 Email ThisBlogThis!Share to TwitterShare to FacebookShare to Pinterest
Labels: art

Train and scenery enthusiasts, spend ten minutes with this beautiful video. I hope you enjoy it Andrew.

I have a new toy. 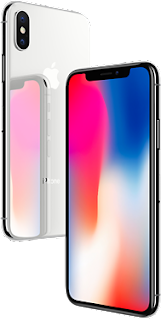 My juvenile need to have the latest model. I took possession of my iPhone X last night. I set it up fairly quickly using the new facility to transfer all my former phone settings wirelessly from another Apple device. Very clever. Very convenient. Very easy.

I usually 'carry' my mobile phone in the pocket of my trousers/shorts. Today was my first full day carrying my shiny toy snug in my trouser pocket. It didn't go quite as expected.

I locked and closed the phone again and placed it back in my pocket.

An hour or so later the phone rang. A friend, having completed a long drive down the coast, was ringing with some concern. She had been unable, whilst driving, to answer my numerous calls to her. Was there a problem? Well yes, I realised. I hadn't called her. But sure enough my new phone showed unanswered calls to her. My phone had made calls to one of my contacts without any involvement by me. Whoa again!

A visit to the Apple Store revealed that last night's set up hadn't been fault free. One small but obviously important step had only partially completed. It took less than a minute to rectify.

I'll probably have a nervous day tomorrow, when the phone is next in my pocket, wondering what hands free magic activities it might initiate.
Posted by Victor at 18:00 4 comments: 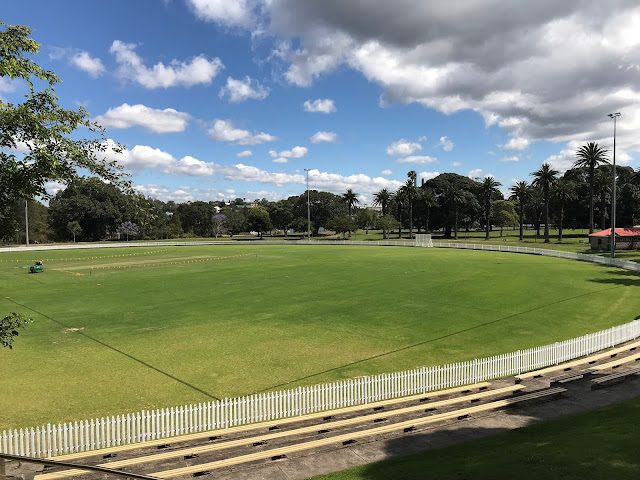 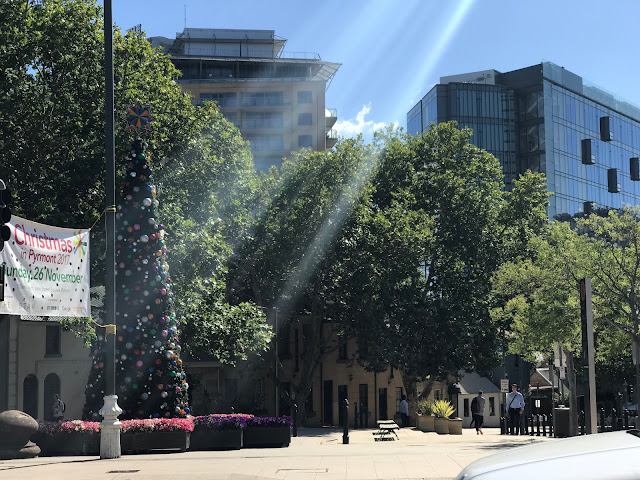 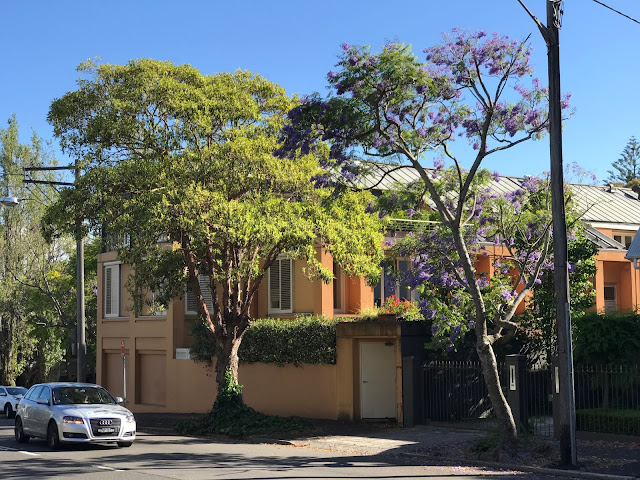 Email ThisBlogThis!Share to TwitterShare to FacebookShare to Pinterest
Labels: sydney
Newer Posts Older Posts Home
Subscribe to: Posts (Atom)
This blog may contain material not suitable for people under the age of 18. If you are under that age, please do not read further and come back when you are 18.