Andre (John Bell) is confused. His daughter and her husband - or is it her boyfriend - seem intent on moving him out of his apartment. They also seem intent on organising care arrangements that he believes he does not require. To add to his confusion he is sure they are giving him conflicting information.

Is Andre being 'gaslighted'?

'The Father' is a terrific and moving study of a man faced with the destructive impact of ageing on his mental state. Bell's performance is superb with powerful support from the other five cast members. 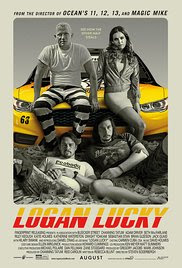 Directed by Steven Soderbergh who made the Oceans 11, 12, 13 series 'Logan Lucky' follows a similar template. An implausible robbery attempt against a highly fortified and defended target presented with a logic which more or less - or almost? - counterbalances the implausibility of the project.

Whereas in the Oceans series the viewer seemed shut out from a sense of in-joking between the star performers, what I prefer in Logan Lucky is that it comes across as being inclusive of the audience. Daniel Craig plays well against type and the entire cast contributes to the fun.

I saw a comment from Andrew on James' blog expressing the view that Sydney's new CBD and South East light rail construction appears over engineered. I don't really know what that means but given how knowledgeable Andrew is about light rail I'm sure he must have a valid point.

Driving through Kensington today I was struck by how the trail of light rail track already installed and yet to come meanders all over the place. I would have assumed the track would run more or less down the middle of the street but what is visible wriggles like a snake. Sometimes on the western side of the road then suddenly on the eastern side. In parts the twin tracks are side by side down the centre but then, whilst still somewhat centred, at the UNSW they part as though to allow for a platform to be constructed between them.

At the moment traffic is horrendous wherever the construction is taking place. You would like to think that will change once the system is operational but the meandering appearance of the line makes me wonder.
Posted by Victor at 17:30 4 comments: 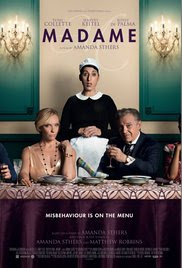 Anne (Toni Collette) the younger second wife of Bob (Harvey Keitel) is preparing a glamorous dinner party in their Parisian apartment with the Mayor of London and his husband amongst the society guests. The unexpected arrival of her step-son prompts Anne to enlist her maid Mary (Rossy de Palma) to even the numbers and participate in the party disguised as a guest. Anne is aghast when the society guests take a shine to Mary and more so that one of them enters into a romance with her.

'Madame' is a very European comedy of manners and relationships with Paris and surrounds providing delightful background images. All the characters have their frailties but the magnificent and exotic looking de Palma alone retains her dignity throughout. 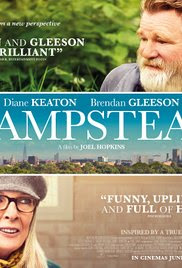 An American widow (Diane Keaton) living in London's 'Hampstead' befriends the world's cleanest 'hermit' (Brendan Gleeson) who has been squatting in a neighbouring park for years and enlists help to fight a developer's attempts to have him evicted.

Based on actual events 'Hampstead' is a very pleasant and utterly predictable film suitable for family viewing and pace maker safe for seniors seeking violence free and vulgarity free entertainment.


A marine (Isaac), dishonourably discharged, returns to his family home to find his sister transitioning to a male (Max), his mother (Paige) engaged in a life of free thought and his father (Arnold) in an apparent catatonic state following a stroke.

Hir is Max's personal pronoun of choice, happily embraced by Paige who is steering the family chaotically into new directions much to Isaac's dismay.

Taylor Mac's play contains an hilarious first act followed by a short and increasingly dark second act which is revelatory about the family's history and personal relationships.

The cast of four brilliantly captures the chaos and the turmoil of the personalities.

It is that time of year. The Art Gallery of New South Wales is displaying the Archibald Prize; the annual prize for portraiture painting. Most years the Prize raises a degree of controversy which is probably just as well for maintaining interest.

As usual I wasn't all that fussed by most of the finalists on display. Even more usual, this year (yet again) I favoured the pick of the Packers - the men and women who unpack the arriving works for display - over the official winner - chosen by the Trustees of the Gallery.

A few snaps to share the atmosphere, or lack of, at this year's display. 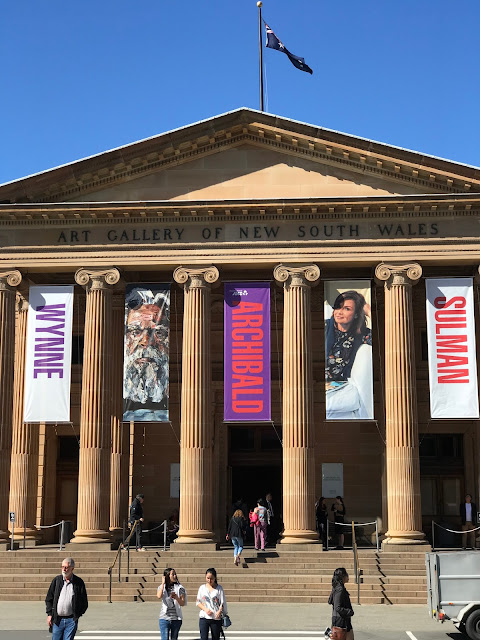 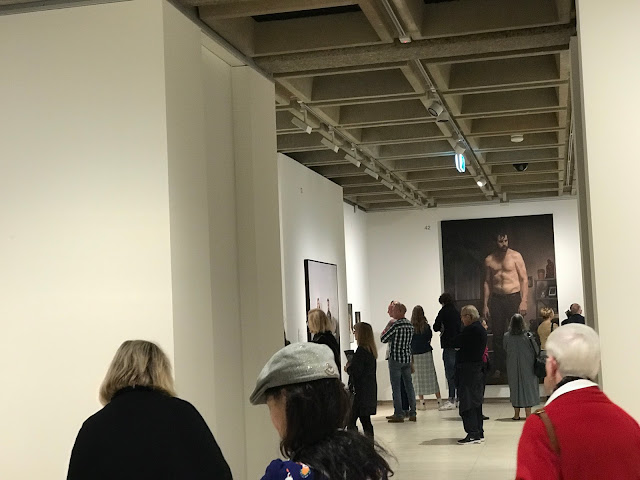 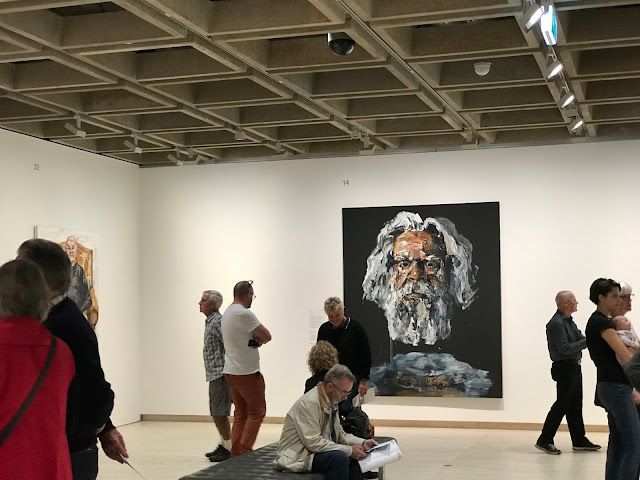 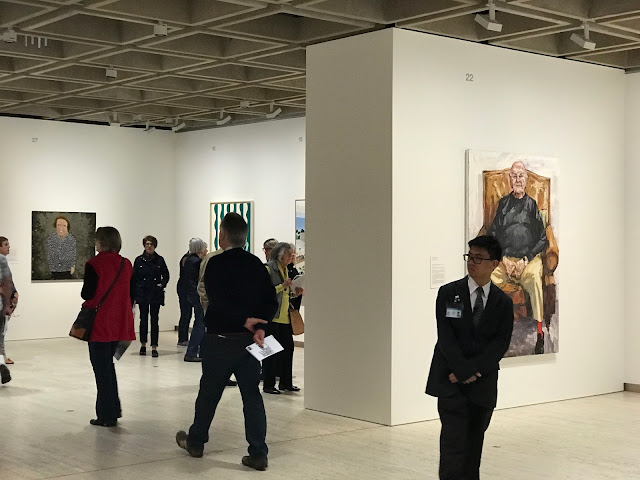 
And for the record, this portrait of Agatha Gothe-Snape by Mitch Cairns won the Archibald Prize.

As the saying goes; I don't know much about art but I know what I like.
Posted by Victor at 19:30 2 comments:

Sydney has not really had a winter this year. Yes, there have been a couple of cold days and some cold mornings but mostly the temperatures have been very mild indeed. One day in July the maximum reached 26º which is the warmest July day recorded at Sydney's weather bureau in 158 years of record keeping. We've enjoyed multiple maximums around the 24º mark.

Sunsets have been colourful and so peaceful looking. This was one of our sunsets this week. 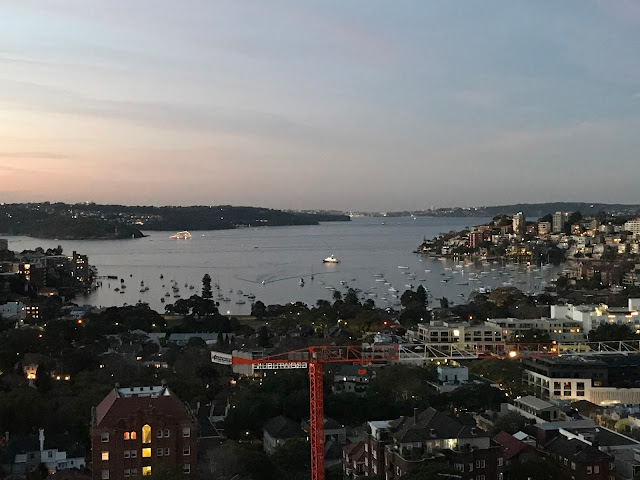 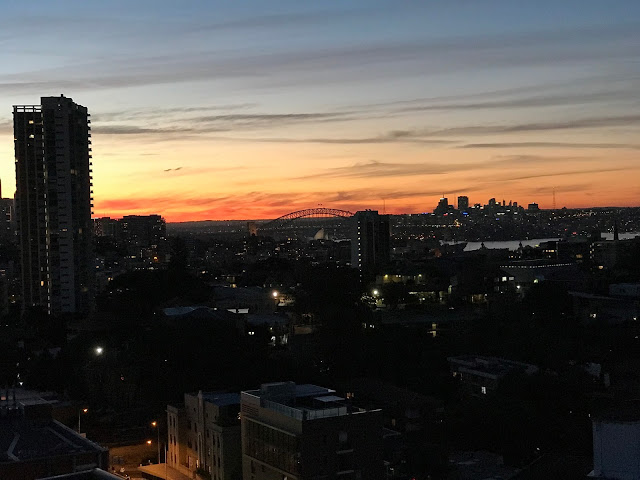 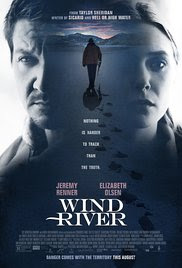 An FBI agent enlists a game tracker to assist her to investigate a murder in a remote, snow bound, Indian reservation in Wyoming.

Whilst the setting is almost literally a polar opposite to 'The Wall', which I commented about in yesterday's post, 'Wind River' shares that film's themes of hostile environment and enemy forces. The snowy mountains in Wyoming provide spectacular scenery. The plot unfolds slowly and most of the action is confined to the final scenes. I didn't mind the slow nature of the film but C was annoyed by it.

The sound design is poor with quite a bit of the dialogue inaudible at times. 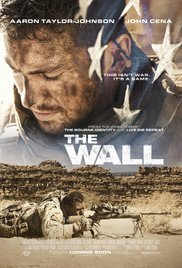 In 2007 the US President, George W Bush, has declared that the Iraq war has been won. The task of rebuilding the country has begun under the watchful eyes of US troops. In this environment two US soldiers find themselves pinned down by an unseen sniper in a hot and dusty hostile location with only a flimsy, decaying stone wall providing any protection.

'The Wall' has only three characters, one of whom is never seen.

This oppressive situation won't appeal to everyone but I think this film gives a terrific sense of remote desert warfare against a determined and unrelenting enemy who seems to hold all the aces. It certainly does not romanticise war.

One Flew Over The Cuckoo's Nest


The arrival of a new and argumentative inmate at a US mental institution in 1963 stirs the settled existing community and staff eliciting changes in attitudes and power bases.

The play 'One Flew Over the Cuckoo's Nest' is adapted from a novel by Ken Kesey. A hugely successful film version was released in 1975. The play is at once disturbing in it's representation of cruel health and welfare treatment and also entertaining as its dominated characters draw on hitherto unrealised strengths.

This may be an amateur production but it is professional in quality.


In 1939 as war appears inevitable a Jewish mother in Germany prepares her young daughter for evacuation to hopeful safety in Britain. In the 1980s in London a mother helps her daughter pack in preparation for her move away from home.

These twin stories and the links between them that become disclosed form the basis of this play. 'Kindertransport' is an interesting play about mother/daughter relationships and issues of identity.


The current presentation from The Production Company, in limited season, at the State Theatre, Arts Centre Melbourne.

If you need a precis of the plot then you haven't been paying attention.

It has been probably been 40 years since I last saw this musical on stage. Revisiting the work properly after such a long break really had me thinking about it. For a Superstar, the Jesus character gets a pretty raw deal.

Judas has most of the best songs and moments. He opens the musical with a big number, closes the musical with a big number and has the last big moment to close Act 1. By comparison Jesus has one big solo musical moment only when mid stream in Act 2 he questions God; 'why must I die?'. Rob Mills (Jesus) handles that moment well earning strong applause. But Zoy Frangos (Judas), an unknown (to me), has the best gig and he makes the most of it. Should the musical be called 'Judas Isacariot, Super-villain'?

Jesus doesn't even have the second best of it. Arguably, Mary Magadelene, Pontius Pilate and King Herod all have better scenes. All three are strongly represented in this staging.

I wonder if Lloyd Webber and Rice had created this musical later in their careers rather than earlier, might Jesus have a got a better deal musically?

As usual, The Production Company has delivered a strong, ensemble performance. The future of Australian musical theatre remains strong with young artists like those we see in their productions.

A day in Melbourne

A quick theatre day trip to Melbourne. A sunny winter's day. The sun surprisingly warm on my back when the chilly breeze drops away.

8am - Dental appointment. Bonding to fill gaps between three teeth and the gum line.

10.30am - Annual skin check. All clear, no new melanomas detected.

Email ThisBlogThis!Share to TwitterShare to FacebookShare to Pinterest
Labels: me 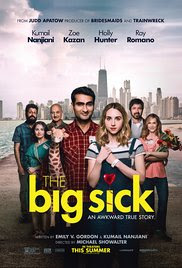 'The Big Sick' is a drama/comedy about generation gaps and culture gaps. In Chicago USA, Pakistani born Kumail Nanjiani resists his parents' attempts at organising an arranged marriage for him all the time keeping secret from them his love for a local non-Pakistani woman.

This bitter sweet tale will be familiar to first generation emigrants across the planet and as the end credits indicate it is drawn from the Nanjiani's real life experiences. The trailer for the movie promotes it as a comedy but it is comedy with a hard edge and a dramatic soul.

Email ThisBlogThis!Share to TwitterShare to FacebookShare to Pinterest
Labels: sydney
Newer Posts Older Posts Home
Subscribe to: Posts (Atom)
This blog may contain material not suitable for people under the age of 18. If you are under that age, please do not read further and come back when you are 18.