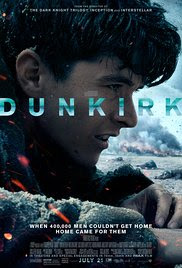 Christopher Nolan's 'Dunkirk' is an imaginative telling of the World War 2 evacuation of hundreds of thousands of trapped allied forces from the Belgian port.

Comparatively short for a war movie and mostly without dialogue 'Dunkirk' comprises three separate but linked stories. The main story is of the week long efforts to evacuate forces from the beach. A second story focuses on a single day when one family owned leisure craft sets out to participate in the rescue efforts. A third story represents just one hour of activity by three British Spitfire pilots to knock enemy aircraft out of the action. What is particularly clever is how these stories are not told sequentially but are presented simultaneously even though they are of different lengths.

Nolan's film portrays war action so realistically I flinched and jumped in my seat numerous times as though I was there with the characters. And these characters are not all heroes either. Arguably some behave disgracefully, even cowardly, at times.

The musical soundtrack is quite unusual. Some might not regard it as musical at all, rather hearing annoying noise but I thought it supported action and impending action splendidly.

It is very telling that a movie has had an effect when the audience does not immediately rush to the exits the second the end credits appear.