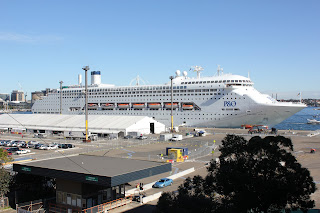 A less than gleaming Pacific Jewel berthed this morning alongside Barangaroo with it's temporary wharf facilities. Out of frame to the left, embarking passengers struggled to bring their luggage down the hill from Wynyard Station and the CBD in what must be a less than glamorous start to their cruise.

The discredited previous State Government and the dispiritingly indecisive new State Government between them have so far failed to come up with an attractive proposal for alternative and badly needed supplementary wharf facilities for the burgeoning cruise industry.