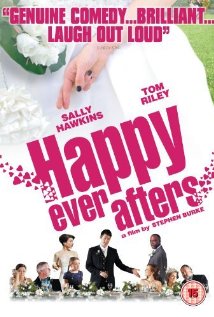 This Irish comedy is from the Death At A Funeral template. Gather a lot of characters in one place and let the mayhem follow right down to including a roof top drama scene.

In Happy Ever Afters it is the wedding day for Maura and Freddy but even before they reach the church you know that the day is not going to end well, let alone as planned.

The film begins promisingly enough with a clever sleight of hand about the ceremony but from then on the comedy is contrived, none too subtle and rather obvious. The actors overact shamelessly.

Best viewed accompanied by several pints of Guinness and copious quantities of chips in vinegar.
Posted by Victor at 15:07