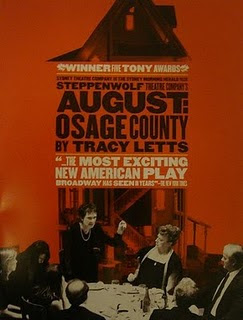 The Sydney Theatre Company is staging Chicago's Steppenwolf Theatre Company's production of August: Osage County. As I understand it the cast is the original company which premiered the work in Chicago in 2007.

A dysfunctional family gathers in its Oklahoma home when it's patriach goes missing and the revelations that ensue are both hilarious and shocking. No-one is left undamaged.

This is simply magnificent theatre. The writing is so natural and the performances of the cast of such quality that I felt I was eavesdropping on a family familiar to me rather than watching a play. The staging appears deceptively simple yet the choreography of the piece, it's lighting and mood changes are complex and timed superbly.

I've rarely seen any theatre piece combine drama, tragedy and biting humour as brilliantly as in this production.

A must see for anyone with even half an interest in the theatre.
Posted by Victor at 08:13