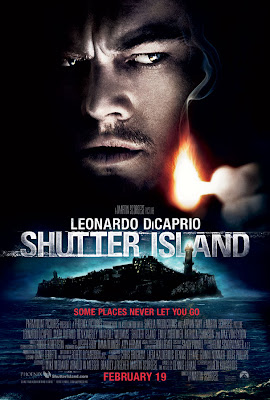 Two of the best movies of recent years have been 'Mystic River' and 'Gone Baby Gone' both based on novels by Dennis Lehane. So it was with high expectation that I went to see 'Shutter Island' also based on a Lehane novel and directed by the highly acclaimed Martin Scorsese.

It is 1954 and Federal Marshall, Leonardo DiCaprio, has travelled to remote Shutter Island to investigate the mysterious disappearance of a mental patient. DiCaprio is beset by shocking memories of the liberation of Dachau Concentration Camp.

Like the two earlier films, 'Shutter Island' relies on a twist but unlike the first two where I did not pick the twist until 'the reveal' at the end it was no more than ten minutes in before I realised how this story was going to finish. I'm no brain surgeon so others must also be working it out; certainly Eddy is one who did so. Unless Scorsese intended this, I can only assume this transperancy is a weakness in the film and/or the story.

It seems to me Scorsese has filmed 'Shutter Island' in the style of the movies of the era. This would explain the melodramatic and overwrought scenes and soundtrack. I'm sure some people will enjoy this film but whilst it has its moments I was disappointed.
Posted by Victor at 19:19