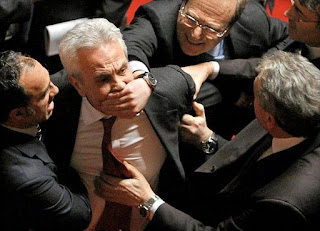 With Australian politics undergoing historic fracturing I thought I would tune into this afternoon's broadcast of Senate debate on climate change legislation.

I sort of hoped, but in truth didn't really expect, to hear rational and reasoned debate from both sides of the political divide. The sort of debate that would assist listeners understand the issues and enable us to reach informed opinions.

Unfortunately, my worst fears were realised. The so called debate was an unbroken stream of abuse and disparagement - by both sides. Not a single speaker actually spoke to the legislation. It was non stop belittlement and mud slinging with the President of the Senate half heartedly attempting to control an endless run of interjections.

We, the tax payers, fund this kindergarten level of behaviour and we are not getting much value from our representatives.
Posted by Victor at 16:28