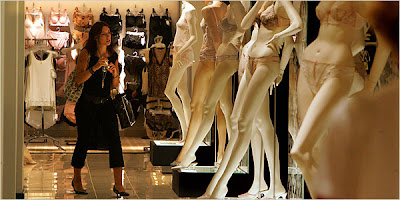 OK, I know that I am a mere male, albeit a gay one, and therefore inferior to the female of the species when it comes to shopping but how on earth do women go about purchasing brassieres?

Despite being armed with the most detailed of specifications from the manager of my mother's Nursing Home and taking along a person of female persuasion as my shopping companion and mentor, the project of purchasing new brassieres for my 84 years old mother today was an ordeal of unspeakable torture.

It appears that Department stores carry sufficient brassieres to dress every female on the planet, each brassiere being as varied as each female. But not one of these was a (specific brand name and model) size 16C (Australian measurement) with high bridge and wide band at back that I was instructed to purchase.

None of a platoon of sales assistants who attempted to assist us, in the most desultory fashion, seemed to have any idea of what we were seeking and even less of what stock they held. My specialist female mentor disappointingly appeared as confused and uncertain as the sales staff although I couldn't fault her persistence and endeavour.

I noticed that at each of the four stores we tried, the other female shoppers present also sought hopeful, almost desperate, direction from the assistants. Female shoppers seemed as tortured as I felt.

I have new admiration for those females who purchase underwear for their boyfriend/husband/son. I'm glad that, my mother aside, I am unlikely to be required to perform the reverse service for anyone in my remaining days.
Posted by Victor at 17:55