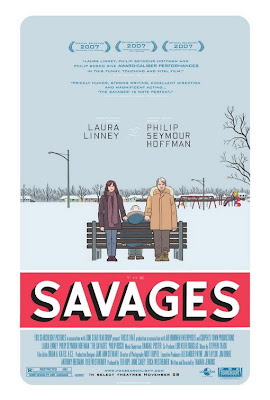 This is the film Mt and I saw in Noosa last Saturday night.

It has been well reviewed in the Australian press, all reviewers mentioning its humour.

Laura Linney and Philip Seymour Hoffman are siblings whose father is descending into dementia and has to be placed in a nursing home. Ostensibly a film about adult children taking on the role of parent to their parents, The Savages is as much about the relationship between the siblings and their own battles in life.

The film was not the humour filled work that we expected from the reviews although there were dark humoured laugh aloud moments. Linney and Hoffman, as expected, played their roles well; indeed all the actors were realistic and their characters beautifully drawn.

Mt and I were able to relate to the storyline. Mt is a Social Worker specialising in aged care and I have my own experiences as a participant in support groups at my mother's Nursing Home.

The depiction of aged care issues and situations in this work were so accurately portrayed, we both felt that the writer/director of this work must have had relevant personal experience.

This would not be a film to everyone's taste but lovers of dark humour and those who have cared for an aged relative or friend will find it interesting.
Posted by Victor at 10:45