Well, I did watch the ceremony on television and I survived until the very end at just after 2am Australian Eastern Time.

As expected, it was a large scale spectacle. There is no shortage of talented performers, artists and gymnasts in China. 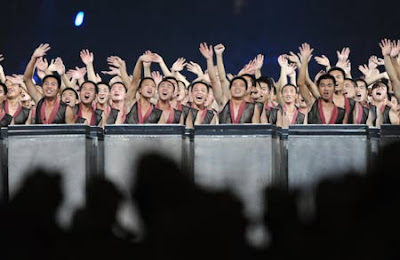 I did ponder the Kafkaesque illusions in the endless lines of permanently smiling, identical worker bees uniformly performing their repetitive chores. I wonder if the authorities recognised this ironic representation from a Communist run system. Perhaps it was intentional? 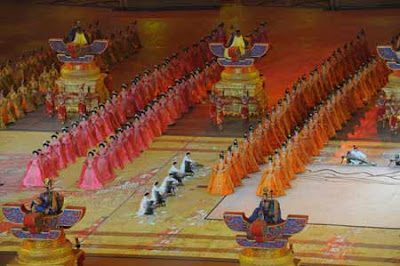 The massive LCD laid into the floor of the stadium was used to brilliant effect. Similarly the stadium's roof was used superbly as a screen for background images. 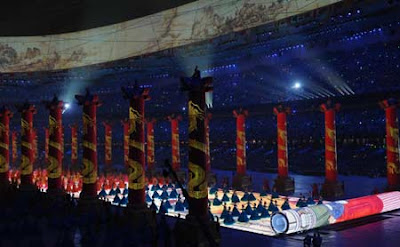 However there were reminders for me of my own time spent in Beijing back in 1980 to 1982 when the authorities mirrored modern technology using the huge population to imitate high tech activity in the fascinating typeset routine. What appeared to be a terrific computerised and automated display was soon revealed to be the precise coordinated work of hundreds of men concealed in boxes. 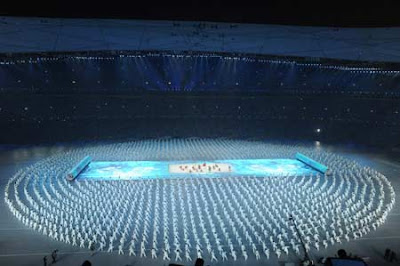 I felt for the hundreds of field marshalls who continuously jigged and clapped their hands for over two hours during the procession of nations. I noticed the women marshalls were wearing high heels. I bet they are feeling the effects this morning. 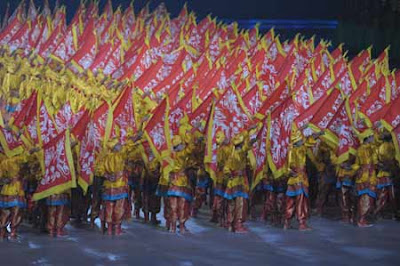 But I feel even more for London who will try to top this spectacularly colourful and synchronised display of an ancient culture going back five thousand years in the Opening Ceremony for their Olympics in 2012.

In the end, as spectacular as it was, I felt like I had watched an Andre Rieu concert. Highly choreographed and not a single second of spontanaiety.
Posted by Victor at 08:21