This posting won't make much sense to readers unfamiliar with the card game of Bridge.

There is a view that life partners should not be partners at Bridge. There would be few pastimes that generate more arguments between people than Bridge.

I have played Bridge with Ce as my regular partner for over fifteen years. We met through Bridge and are in no way life or social partners but our long and generally amicable Bridge partnership has often been commented upon by other players as remarkable.

That's not to say we haven't had our disagreement over the cards from time to time and both of us have been at fault on occasions. 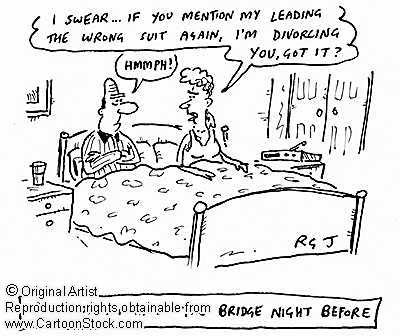 Unknown to me, my failure to support Ce's bid in the very first board we played tonight festered in Ce's mind. I only became aware of this about ten boards later when Ce, having made an elementary mistake, exploded with a quite nasty comment to me relating back to that first board.

Our opponents were taken aback and so was I.

When I got home I was quick to check our results on the Internet. We didn't do very well overall but interestingly on that first board we scored a very respectable 67%. Significantly none of the other pairs was in the contract Ce accused me of failing to get us into.

I feel vindicated.
Posted by Victor at 23:25