I download Apps to my smart phone and tablet on a whim. Some, like NextThere, which tells me when a bus I'm waiting for is due, are very useful. Others, that I won't name, prove useless and remain unloved on my devices until eventually I delete them.

One of my loved Apps is FlightRadar24 which tracks commercial flights all over the world and provides me with hours of mindless entertainment when I am in the mood. 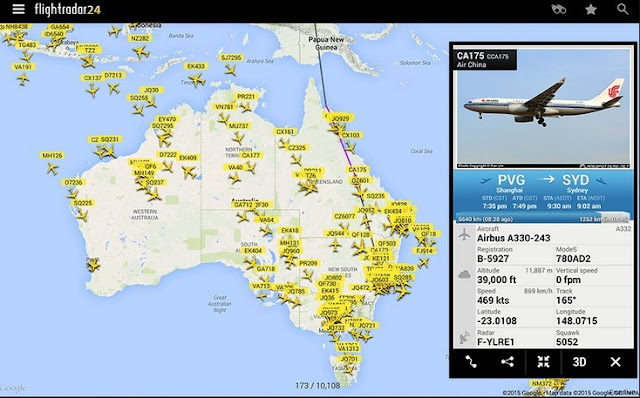 I see various flight paths to/from Sydney Airport from my apartment and often will open the App to identify passing planes and their routes.

Occasionally, like yesterday, I monitor a particular flight carrying friends. Cz and Cw flew to Vancouver yesterday and on and off for the best part of 12 hours I checked the passage of their flight. From ascent, I watched whilst the plane was still low over Sydney inner suburbs. Hours later after a cinema visit I tuned back in to see them somewhere over the South Pacific Ocean. Another couple of hours later and their flight was passing by the Hawaiian Islands and later still, at my bedtime, the west coasts of the United States and Canada appeared on screen as the flight was within 90 minutes of arrival at Vancouver.