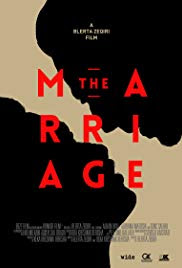 I would be pretty sure that 'The Marriage' is the first film I have ever seen made or even set in Albania.

It opens with a long, somewhat obscure, scene. A man and a woman are waiting with a number of others for some arrivals. Eventually a line of vehicles arrive and as do numerous people wearing white hazard protective clothing. It seems that the people have been waiting to identify and recover the remains of relatives; victims of war.

The man and the woman are engaged to be married and a friend of the groom arrives from France where he has been living for four years. Initially the three of them socialise but strains emerge as the true nature of the groom's friendship with this new arrival begin to surface.

A rather slow film which I imagine is more daring in its native country than it comes across in Australia. Provides an interesting glimpse into Albanian culture and life.