It is not unusual to see wedding ceremonies occurring in Sydney's magnificent Centennial Park. Indeed the Park's website has an entire section on reserving space in the Park for a wedding ceremony, scheduling wedding photographs in the Park and even on staying in the Park in connection with a wedding.

So when I was driving through the Park yesterday and saw this sight at the Belvedere Amphitheatre in the Park my first thought was that a wedding was about to occur. 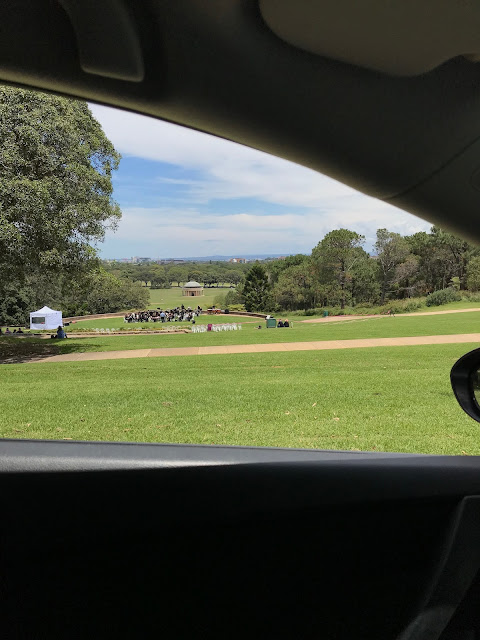 How fancy. An orchestra in place!

But then I took a closer look. 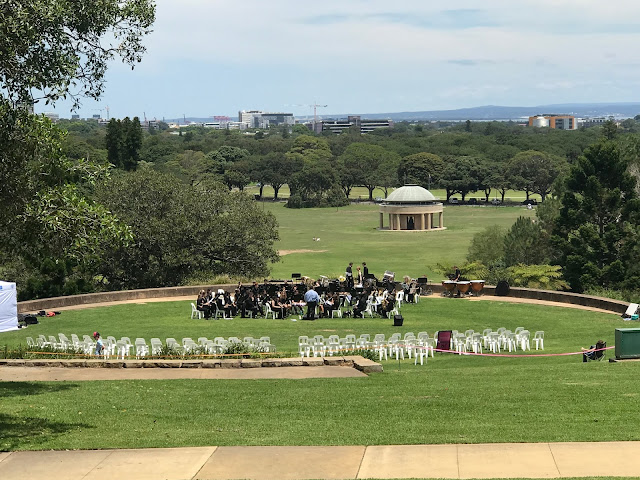 A lovely setting. Sweeping views towards the South where upper right you see the upper levels of the main Grandstand at Randwick Racecourse. The buildings upper middle belong to the University of New South Wales. The domed building in the centre is Federation Pavilion constructed in 1988 to mark the place where the Proclamation of the Commonwealth of Australia occurred in 1901.

But back to the wedding. The orchestra appeared to be a youth orchestra. Unless the wedding party involved teachers and/or students a Youth Orchestra seemed an odd choice for a wedding. And then the Orchestra started to perform; apparently in rehearsal. The first few notes were very much the sounds of young musicians. Not only that but the first few bars of music also clearly were the Star Wars movie theme.

Now, that is an odd choice for a wedding.

When I returned home hours later I checked the What's On section in Park's website. My more considered reactions proved justified. The orchestra was not preparing for a wedding yesterday. They were rehearsing for Classics in the Park; an outdoor family concert performed by 'Sydney Youth Orchestras'.

Interestingly the website advertises the price for this event as $20. I could see and hear the Orchestra perfectly well from my vantage point beyond the loosely roped off area which surrounded the white plastic chairs. Had I attended the concert I think would have joined the early gathering hoi polloi on their blankets and fold up chairs beyond the rope.
Posted by Victor at 07:00