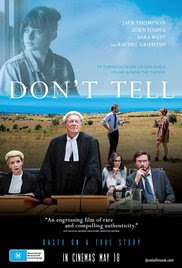 'Don't Tell' is centred around a civil trial for damages sought by Lyndal (Sarah West) for sexual abuse she suffered at the hands of a teacher at her school. The story is based on actual events in Queensland which led eventually to the resignation of an Australian Governor General and which also was a trigger for a national Royal Commission into institutional child abuse.

The story is told without sensationalism. It is an important reminder of shocking failures in child protection and the powerful forces that tried to cover up those failures.