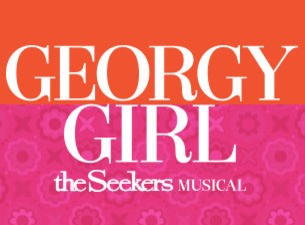 'Georgy Girl' tells the story of the Australian group The Seekers who came into world prominence in the 1960s and whose folksy style of music was as popular and at times more popular than contemporary groups including a couple of bands you may have heard about....The Beatles and The Rolling Stones.

Just three years ago I saw The Seekers perform at the same venue at the start of a tour in celebration of their fifty years performing. The tour had to be abandoned a few days later, not for lack of interest but when lead singer Judith Durham suffered a serious illness.

On that occasion The Seekers performed several dozen of their songs weaving them around vision and commentary about their performance history. To be honest that 2013 concert was a more interesting representation of their careers than this newly conceived musical.

The performers in Georgy Girl are skilful and sing well but the musical is singularly lacking in drama in Act 1 which feature as much, if not more, music by artists than the The Seekers. This Act is reminiscent of the cabaret productions favoured by cruise ships. The second Act is more dramatic and interesting.

A bit disappointing in my view although the audience generally seemed very enthusiastic at the end.