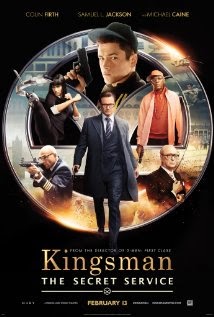 I'm not particularly familiar with Kingsman the comic book series but a viewing of 'Kingsman: The Secret Service' I suspect gave me a firm idea of what the series is like.

A group of hand picked and tested mostly gentlemen using code names from King Arthur's court save or protect people from difficulty under the guise of a select Saville Row Gentlemen's outfitter. The self appointed group of nerdy looking individuals have access to an unlikely array of high tech weaponry that would be the envy of James Bond and his ilk.

I quite enjoyed the low key dry humour in the general premise of the set up. However the over the top stylised violence which probably looks OK in comic panels struck me as overlong and tiresome in movie form.
★★★
Posted by Victor at 20:00