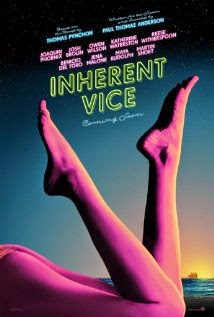 A Private Investigator (Joaquin Phoenix) is asked by a former girlfriend to trace her missing boyfriend only for her to go missing too.

'Inherent Vice' is set in the California of 1971 and is full of 1960s hippy, surf and drug culture. The languid atmosphere of the film's design had me dozing off frequently. It's an overlong film noir 'wannabe' with some ironic moments.

'If you can remember the 1960s, then you weren't there' is a popular saying. If you can make sense of this film's plot and characters then you must have been high.
★★
Posted by Victor at 18:00