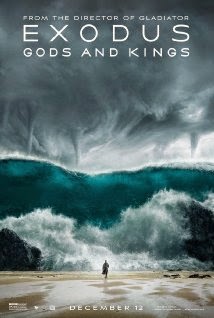 The trailers and advertisements for 'Exodus: Gods and Kings' seem intentionally to conceal the rather obvious fact that this is a retelling of the biblical tale of Moses securing the release of the Hebrews from centuries of bondage under the Pharaohs of Egypt. I can only assume there was a thought that more people might see the film which in essence is promoted as two brothers falling out if the biblical connection was not mentioned up front.

There have been at least four previous filmed versions of this story spread across 84 years (1923-2007) all of them titled 'The Ten Commandments'; the two most famous being Cecil B De Mille's two productions (1923 and 1956). The advantages that 'Exodus: Gods and Kings' has over the earlier works include that it is more realistic and shuns the melodrama of its predecessors. In addition it has the benefit of 21st technology for its impressive special effects.

On the negative side, the screenplay is banal at times and there are moments of ironic and suggestive humour that seem out of place. The film has caused a furore over its casting and the decision to use a nine year old boy as the embodiment of God is rather perplexing even though the actor used has a eerily mature manner.

Despite the negatives I quite enjoyed this biblical epic.
★★★1/2
Posted by Victor at 16:41