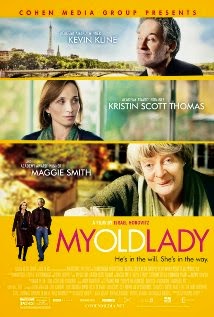 In 'My Old Lady' Kevin Kline travels to Paris to claim an apartment he has inherited from his father's estate only to find he is unable to sell the place because of a French law which entitles the former owner and now resident, Maggie Smith, occupancy of the home for life.

The casting suggests that the film is a comedy and whilst there is the occasional humorous moment this adaptation of a stage play is mostly a drama and I'm afraid a rather dull one at that. I did not care much for the characters and the dialogue heavy film, betraying its stage origins, is redeemed only by the glimpses of Paris; images that rarely fail to delight.

Neither Ms Smith playing a more subdued character than her roles of the past decade nor the usually reliable Kristin Scott Thomas can save this dull piece.
★★1/2
Posted by Victor at 15:26