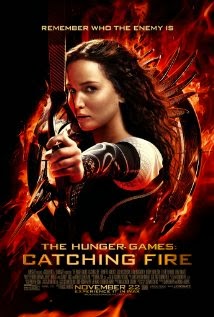 I haven't read the Hunger Games books nor did I see the initial film so I have come to the second film in the series, 'The Hunger Games: Catching Fire' without foreknowledge.

The film is set at some future date with a community divided between those who live in the Capital, who appear to have a comfortable existence under the rule of a Dictator, and those living in outlying regions referred to simply by numbered Districts. The District residents mostly live in oppressed conditions in a barren industrial environment.

To distract the residents of the Districts periodic Games are held comprising representatives of each District who face life and death challenges in a sort of super reality series broadcast presumably to the citizens. The competitors must compete both as individuals and as teams in cutthroat activities with the one who defies death the longest being the winner.

Well, that's what I sort of gathered from this standalone film which provides no introductory recap of the earlier edition for we newbies to the series. The plot seems to have evolved using the Biblical book of Exodus for inspiration mixed with an extreme adaptation of reality television programs such as Big Brother, Survivor and The Apprentice. There is no specific ending for this film which cuts off abruptly obviously setting up for the sequel.

As with most fantasy adventures the plot contains more holes than a portion of swiss cheese but as an entertainment it is surprisingly effective despite the frustration of an ending without conclusion.
★★★
Posted by Victor at 16:38