I knew it before I entered the doctor's surgery. I expected it. His look of disapproval. His words of reprobation.

I knew, from the scales at home, that I had put weight on since the last time he checked it about six months ago. I hoped the increase when checked in the surgery would be at the lower level of the range but no such luck. The reading was at the higher level. 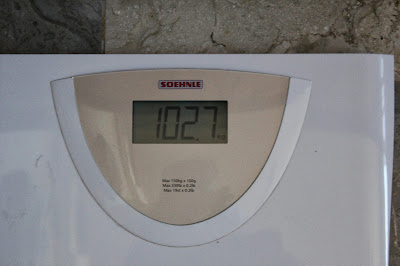 Five kilos heavier than when I weighed in six months earlier. My heaviest ever weight. My first ever readings in three figures.

That was bad enough but I wasn't expecting the double whammy. My blood pressure readings, so good for so many years now, were a shock. Both readings. Lying down and standing. I remembered that I had forgotten. I'd forgotten to take my medication that morning. That might have had some impact. Wake up to myself, all that additional weight must be a significant culprit.