A quickie for a friend

I made a flying visit to Brisbane today to mark a milestone birthday for a dear friend. I flew out of Sydney at 8.05am and was back home at 8.25pm. About sixty people congregated in a pretty Brisbane suburban park for the casual BBQ. The food was delicious and the company friendly. Our BBQ area was festooned with colourful balloons, streamers and paper baubles. Photos of the birthday 'girl' at her earlier milestone stages hung from the beams and produced screams of laughter, even shock, at how we used to look in decades long past.

The various Gazebo like structures scattered around the park were similarly occupied by partying groups most of whom appeared to be celebrating birthdays of their own. One was a very young children's group dressed mostly as pirates whose adult supervisors had devised a range of imaginative games, chases and park hunts.

A lovely day in gorgeous surroundings.

As the sun lay low in the sky late in the day and most of the park celebrants had dispersed I made my departure for the airport to catch my flight home. The park now was an oasis of calm with our Gazebo at piece in its centre. 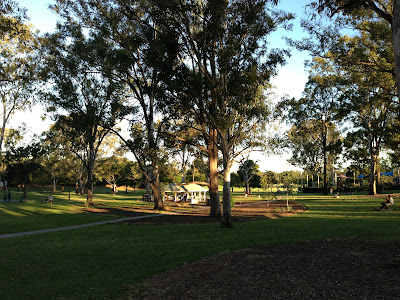