I've been reflecting on my post from last Thursday about the politician swearing on live television. Readers under the age of 40 would probably find the issue fairly tame and might wonder why anyone would even raise the issue.

We hear swearing on television and in movies all the time now. Four letter words abound in movies and we scarcely notice them. A current reality series on Australian television features plenty of swearing from the three sons featured, one of whom - aged 14 - has several times shouted out 'fuck' in his parents' hearing.

It wasn't always that way. There was a time when swearing, of the four letter word variety, was taboo on television and in English language movies. Indeed that was still the case when I had reached adulthood and was into my twenties.

I can recall the first time I saw an English language movie that contained a four letter word. So remarkable was this development that I still remember the cinema where I saw it and even where I was seated. That's how shocking and memorable was that the moment.

What was the film that contained that first swear word I heard on screen? Surprisingly it was a musical. A very good musical indeed. 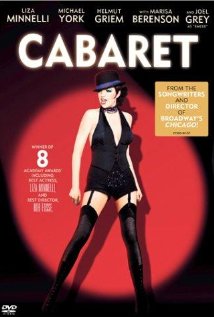 Yes, it was 'Cabaret' and to make the moment even more shocking that first four letter utterance was delivered by a woman. Midway through the film Liza Minnelli, in her character as Sally Bowles, has just suffered another ruinous relationship. She flops back on her bed and exclaims 'shit!'. Just the one word. Tame nowadays but in those days shocking enough for there to be dead quiet in the cinema afterwards. Sitting in that darkened auditorium I felt my face redden and burn with embarrassment for several minutes. Of course I was familiar with the word in all male environments but never till that time in mixed company, never in open company and never uttered by a female.

I know my upbringing was somewhat sheltered but I believe my stunned reaction was pretty common then. How times have changed.
Posted by Victor at 08:08