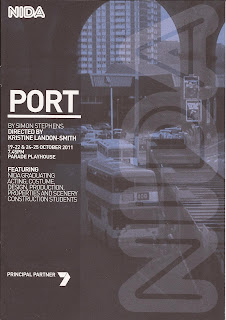 It's the time of year when NIDA's graduating class stages a series of productions to showcase their talents to the public, friends and associates and most importantly to potential employers in the industry. Cs and I are seeing a couple of those performances and tonight we attended Port.

This is a one act play focusing on a young woman named Rachel between 1988 to around 2000 during which she progresses from school student to unhappily married woman. Most, if not all of the play, is set in the town of Stockport in Cheshire, England. Hence, I assume, the play's title. Stockport is part of Greater Manchester and I presume is dominated by that city. The play contains several references to that city's footballing colossus, Manchester United.

It is a rather dull play to be quite honest, mostly talking heads and all that talk is mainly about relationships and is less than enthralling. There is almost no action and the majority of scenes are completely static. It is heavy going if you ask me. An intimate piece like this requires an intimate setting. Staged at NIDA's Parade Playhouse, the venue is not large but nonetheless proves to be too big for this work especially the way it has been designed. Incredibly, the modestly sized performance space has been made to appear gigantic with it's long scenes between two or three mostly motionless characters sometimes placed high on a balcony on the back wall. Even with Cs and I sitting in the second row, these performers appeared minute and distant. Other scenes are placed at the extreme sides of the performance space. I suppose this design was intended to compensate for the lack of movement but it just didn't work for the play.

The Director's notes refer to the work as a 'poetic play'. One definition for 'poetry' I found is' the art of rhythmical composition, written or spoken, for exciting pleasure by beautiful, imaginative or elevated thoughts'. This play does not meet that definition in my opinion.

The performers did a reasonable job. It is a pity that the work and staging let them down.
Posted by Victor at 23:49