My forty years old building is undergoing maintenance. All the windows and window frames are being replaced. This is a major project expected to take about four months to complete. We are in the second week of the project and the workers have reached my unit on the fifth floor which is also the fifth to be worked on. I've had to clear the lounge room and dining room and a small room the Doyen of our resident owners refers to as 'the den' as well as the bathroom. I've used up every old sheet I have and then some donated by said Doyen as protection against the considerable amount of dust the work is stirring up and clumped as much of the furniture as I can alongside walls and well away from the windows.

Here is my lounge room... 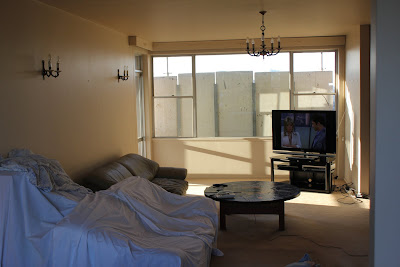 After taking this photo I upended the coffee table and rolled it against the sofa and covered them both. The view is obscured by protective boards on the ledge outside the lounge room window.

Keen observers who expand the photograph will note that The Bold and the Beautiful is screening on the television. I had switched the television on to view the evening news which was about to commence at 5pm. Later on the television was also covered and moved away from the window.

Here is the view from the other direction towards the dining room.... 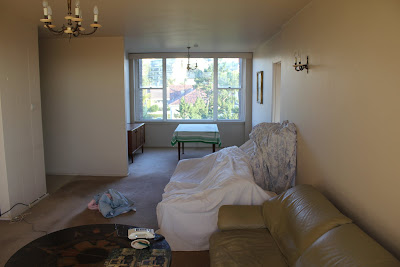 The dining room furniture was moved a short time later. I only noticed hours afterwards that I had forgotten to remove the print still showing on the right hand side of the dining room and so that was temporarily relocated to the bedrooms along with so much of the other furnishings.

The workers will start on my unit tomorrow (Wednesday)  morning at 7.15.

As promised all the windows and frames in the four nominated rooms were replaced by 3.30pm. However the workers have to return Thursday morning at 7am to complete sealing the windows. In the meantime all the relocated furnishings, prints etc remain under cover and out of use.

The workers will return later in the project to change the windows, window frames and glass doors in the two bedrooms, the kitchen and the balcony. There is still a long way to go.
Posted by Victor at 17:35