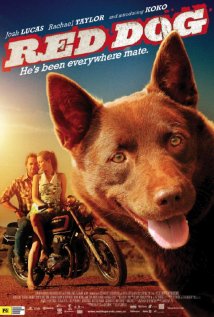 A dog coated in red dust generated from the mining of iron ore searches for it's owner in the remote area of North Western Australia known as the Pilbara. It attaches itself to members of the mining community and one way or another features in significant moments in their lives and understandably comes to be a loved member of the mining family.

Apparently Red Dog is based on actual events which were hitherto unknown to me and certainly the film's narrative unfolds in the style of stories passed down through the generations which no doubt have been embellished in the retelling.

The film has received lavish praise from some quarters. Sadly I don't share that opinion. I concede that there is quite a bit of humour in the film but I thought that a lot of that humour was predictable. The performances are honest and capable and possibly very realistic in their setting but I didn't think that anyone was outstanding. The images of this dusty, remote region were occasionally interesting but rarely as arresting as I sometimes seen in photographs.

For mine (and for Cs with whom I saw it) Red Dog is a moderate film but others, including Jn and Jh who attended the same session, thought the film to be 'the best ever'.
Posted by Victor at 15:42