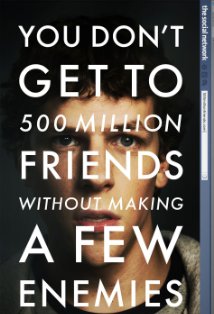 Brilliant, abrasive, dismissive, impatient and a lot more besides makes Mark Zuckerberg a rather unpleasant fellow and when his girlfriend breaks up with him at the outset of 'The Social Network' the genius computer programmer sets on a course which leads him to expand his local dormitory social computer network into what eventually becomes the international sensation, Facebook.
Of course success has many parents, claimed or real, and within several years Zuckerberg is battling various law suits from competitors and erstwhile colleagues alike over ownership of the intellectual property. Jesse Eisenberg is sensational as Zuckerberg and Justin Timberlake is equally impressive as the confident  wheeler and dealer and ladies man who Zuckerberg idolises and yearns to emulate.

The screenplay is a cracker and packed with wit. My only reservation with the film is that Eisenberg's machine gun like delivery makes the dialogue difficult to follow at times especially in those moments when the soundtrack thumps ominously to the fore.

Ten minutes in and I was thinking that this film seems somewhat dull but I was soon won over.

A terrific experience.
Posted by Victor at 16:00