The Bold and the Radioactive 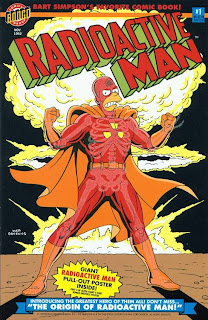 My friend My had treatment yesterday for a thyroid condition; a small capsule that was handed to her in a cup and which she had to swallow without touching with her hands. According to the doctors My is now radioactive until the end of the week. In the meantime, My could set off airport security alarms and she has to avoid crowds, public cutlery, shopping queues and all manner of activities from sexual intercourse - no danger to her from me there - to moviegoing and mouth kisses.

However My can visit cafes as long as she stays a metre apart from others and does not use their cutlery. Spending time alone indoors is not My's idea of fun so she asked if I was available to accompany her for a walk and talk. Unfortunately it was pretty wet this morning so instead of the intended long walk we took ourselves along to a nearby cafe where I dutifully sat at least one metre apart from her and avoided any temptation that might have developed to kiss her, let alone engage in sexual intercourse.

My is spending the three days at a friend's flat in Clovelly and neither of us knew the vicinity so we opted for the first cafe we encountered. This turned out to be Boncaffe in Frenchman's Road, Randwick. A very fortuitous encounter, as it turns out. Inexpensive, friendly and efficient service, very tasty snacks and a lively clientele.

I suggested that My should be radioactive more often to give us the excuse to frequent this cafe.
Posted by Victor at 15:26