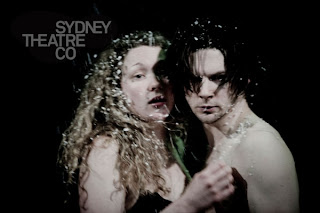 The current Sydney Theatre Company production is The Mysteries: Genesis.

The program notes informed us that The Mystery Plays were religious dramas, consisting of a cycle of plays, that developed in Medieval Europe. They were performed on pageant wagons that travelled around the town to various stations, the audience travelling from station to station to view an entire cycle of plays.

This production contains three 'plays'; 'Adam, Eve'; 'Cain, Abel' and 'Noah's Ark' - spread over three hours. For the first and third plays the audience is seated on chairs or the floor or standing around the performance space according to its preference. For the middle play, the audience joins the actors on the performance space and mingles with them as they perform that play.

I'm not into religious works as a rule but this work, with it's sparse staging is told in an interesting way. Within minutes you scarcely notice the nudity of the first play which given the subject matter comes across as perfectly natural and relevant. The acting of the young cast is excellent.

The Company warned patrons that this is 'theatre for the adventurous' but to my observation last night's audience of all ages accepted the adventure with ease.
Posted by Victor at 22:09