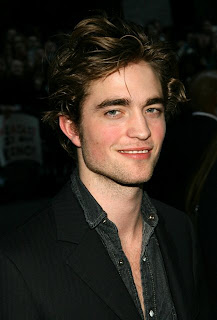 I have a wide tolerance for what I find attractive in a man but Robert Pattinson who attracts a lot of media attention for his appearances in a certain vampire series of movies has never done it for me.

From the outset his photographs have suggested to me a scruffiness and less than appealing standards of hygeine and now, if magazine reports are to be believed, he has admitted his personal hygeine 'is disgusting'.
Posted by Victor at 23:42