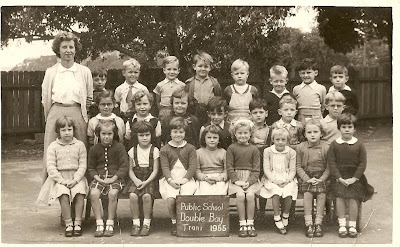 (Click to enlarge)
Here is a photo of potential 20th Century movers and shakers. Well maybe not; I don't really know. It is the Double Bay Public School Transition class of 1955 (that is, the class between Kindergarten and First Class in Primary School).

The 'cherub' second from the right in the top row would not have known what a computer was in 1955 but now in his retirement he maintains a blog. Yes that is me, aged six.
Posted by Victor at 15:51

Email ThisBlogThis!Share to TwitterShare to FacebookShare to Pinterest
Labels: memories