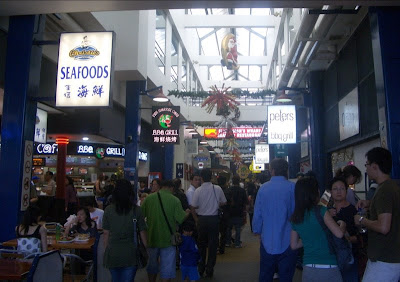 This photo was taken off the Net as I didn't have my camera handy but the scene at the Sydney Fish Market today was very much as above except that there was no Santa hanging from the ceiling.

We took the Day Centre group to the Fish Market today as an outing. Although a very sunny day it was pretty cold by Sydney standards at about 12c with a chilly wind making it feel cooler still. There weren't many warm spots for this elderly group to have their lunch and sitting outside was out of the question although many younger people well rugged up were dining by the bay in the sun. In the end most of the group ate at Peters (seen on the right). One couple chose to brave the cold and eat at Nicks, I think it was called, next door whilst one other man took himself off to the more up market Doyles for a Chowder.

Peters was certainly popular especially with those purchasing fresh fish for home although I think the food they served was of rather ordinary quality. I wasn't particularly hungry and had ordered a fish cocktail and regular portion of chips and was stunned when I was given five fish pieces.

All the servings proved too hearty for the group so quite a lot of food was wasted.

The Deli and Bakery proved very tempting though and many in the group came away laden with purchases from them.
Posted by Victor at 14:36