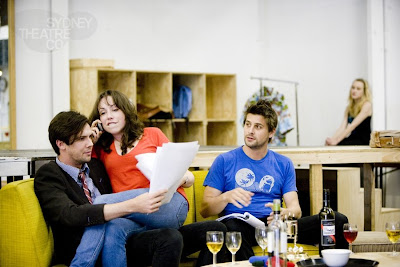 Mk and I went to the Wharf Theatre Monday night to see Rabbit.

I saw a new notice at the bar stating that patrons were welcome to take their drinks into the auditorium. I wondered whether this was one of the fresh directions taken by the Sydney Theatre Company's new creative directors, Cate Blanchett and Andrew Upton. I'll come back to this point later.

The play has two threads running through it. The main thread being a birthday gathering in a bar by five late twentysomethings who, over plentiful drinks, discuss love, relationships and careers. The other thread, most of it in flashbacks, focuses on the birthday girl and her dying father.

The five party goers are well lubricated as the evening progresses and their conversation becomes increasingly raucous and argumentative. This was effectively portrayed by an attractive cast. There were plenty of laughs and my impression was that the largely young audience recognised the situation as one they had been in themselves and they enjoyed the work.

Mk, who is not averse to an evening of wining and dining himself, loved the play and its cast and thought the work had been well directed. I thought the cast had performed well but I was less enamoured of the play. As a non drinker the play reminded me of situations I had experienced when joining a sea of drinkers deep in conversations hilarious to them which remained coldly unfunny to me in my sober state.

Perhaps the notice inviting the audience to take their drinks into the auditorium was a hint that drinking along with the cast is the best way to appreciate this play?

In any event it occurred to me that the play is not one for teetotallers.
Posted by Victor at 13:28