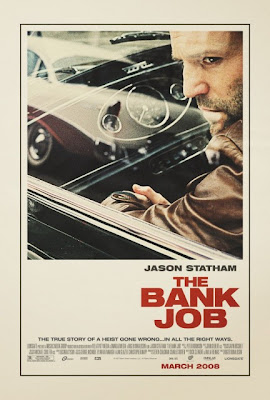 In 1971, the Baker Street branch of Lloyds Bank was robbed. More money was stolen than in the Great Train Robbery. No one was charged with the robbery and the British Government prevented any reporting about the robbery for thirty years. All of that is true. Why?

The Bank Job purports to tell the why and how of this affair. If all or some of what is told in this film is true then the truth is fascinating. If none of it is true then the film is a great yarn anyway.

The British seem to do charismatic crooks better than anyone and Jason Statham is another in the illustrious line of these characters. The cast is uniformly strong with David Suchet magnificent in a key supporting role. Although he seemed vaguely familiar to me during the movie I didn't place Suchet in the role until it was revealed in the end credits. For those who only know Suchet as Agatha Christie's Poirot, this performance will be an eye opener.

An excellent film.
Posted by Victor at 16:17

Email ThisBlogThis!Share to TwitterShare to FacebookShare to Pinterest
Labels: believe it or not, cinema