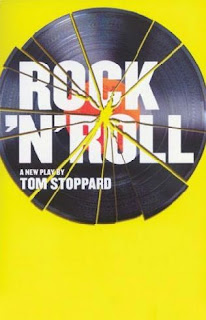 Mk and I saw this Tom Stoppard play on Thursday evening.

The story is set across twenty years from the Czech 'spring' of political awakening in 1968 to 1987. Scenes alternate between Cambridge in England and Prague. Act 1 focuses on political issues whilst Act 2, seemingly another play, is all about the relationships of the characters.

I am not an overly intelligent or analytical man and generally find Stoppard too complex. I can enjoy the wit in his writing and the surface elements of his storylines but I rarely decipher the deeper meaning of his work.

So it was no surprise to me that I didn't 'get' this work. I was not alone. It was noticeable that quite a few patrons did not resume their seats after the interval. However many who stayed did enjoy the play very much judging by the enthusiastic applause they accorded the performance at the end. Mk thought the play was wonderful. So did Rt and Jy from the bridge club who we ran into in the foyer during interval.

The acting was quite strong although I was baffled by Matthew Newton's on/off East European accent. As usual Mk found an explanation for this oddity but his theory just confirmed my ongoing lack of understanding of Stoppard.

I might have had a greater appreciation of this play had I known about and read this site before seeing it.
Posted by Victor at 14:15