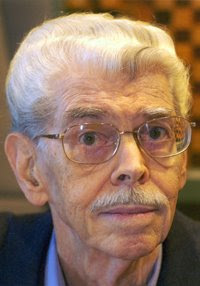 I have just listened to the final Singers of Renown on Radio National.

Its presenter, John Cargher, has hosted the program for 42 years and brought his knowledge and love of opera and singers to millions of Australians. I recall sitting at the dinner table with my parents as a teenager listening to his program on a transistor radio and through earphones ignoring whatever conversation my parents might have been having over the meal.

For many years now I have listened to the replay at 6am on Sunday as a pleasant way to start the 'day of rest'.

Sadly, the 89 years old Mr Cargher was too ill to introduce the final program as he had hoped. Instead, today's final program was a repeat of the 2,000th edition from 2005 when he discussed his background and history.

Well done and farewell John Cargher.
Posted by Victor at 16:59