When I was a child I travelled to and from school by tram. I loved them and it was my dream that I would grow up to be a tram driver.

Sydney's first tram service was in 1861. By the early 1930s Sydney's tram system covered 290km and I believe was the second largest in the then British Empire. The system moved large numbers of Sydney's population and the photograph below shows trams lined up at Central Station ready for peak movements. 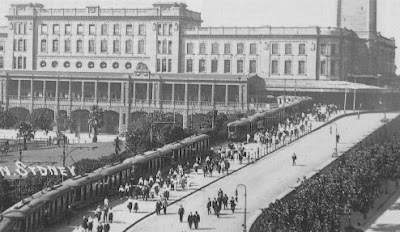 Unfortunately for my early career dreams, Governments of the day did not see trams as the best solution for Sydney's transport needs and the system was gradually dismantled and finally closed in 1961, one hundred years after the first service.

There have been numerous proposals since to reintroduce trams almost all of which have been resisted by the authorities.

In 1995 one line was opened which linked Central Station to the Casino with the leisure district of Darling Harbour in between. That line was extended slightly to suburban Lilyfield utilising disused goods train lines.

This is a semi tourist semi commuter line; neither quite one thing nor the other. The State Government remains hostile to any suggestions that it be extended further and upgraded to a proper commuter service despite this being favoured by the Sydney City Council.

The photograph below is of the current tram carriage at its Central Station terminus located on the concourse on the upper deck that can be seen in the photograph above. 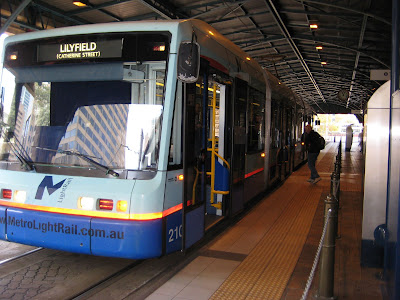 The limited nature of the current service is indicated from the map photographed below. 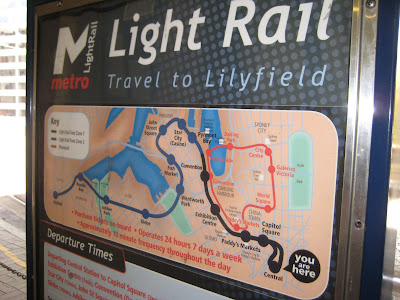